The SKU codes are created by companies on the basis of the composition of the inventory, keeping in mind that through the aforementioned cipher it will be easier to exchange information with customers and suppliers. It is essential in fulfillment operations, i.e. the procedure that starts automatically when a customer places an order and immediate communication must be initiated between the warehouse and the retailer.

What is the SKU and what does it mean?

SKU stands for Stock Keeping Unit , and is the unique alphanumeric sequence used by medium to large companies to track the items in the warehouse, locate them efficiently and prevent confusion with similar items.

The SKU code is composed of some values that allow internal cataloging, such as price, size or color, and other indicators that allow you to communicate with customers and suppliers more easily. Although it resembles the ISBN type barcode, it should not be confused with the latter, as the SKU code, rather than the type of item, mainly indicates its position in the warehouse. So this implies that the same product can have different SKUs, based on where it was stored in the warehouse.

Another function that this alphanumeric sequence performs is the subdivision of the items by minimum sales unit . This indicator is very useful for companies to carry out a precise inventory and to optimize stocks, especially in the logistics departments that can operate in a more streamlined manner.

How does the generation of a SKU take place?

Before creating a SKU code, it is necessary to carry out an in-depth analysis of the inventory, the product to be coded and the needs of the customers. After having analyzed all the elements, we move on to structuring, choosing the sequence that best suits the needs of the parts under consideration, with a consequent subdivision into minimum sales units.

To illustrate the concept, it may be useful to analyze an example. By way of model we can refer to what could happen in a company that deals with clothing and specifically footwear. The structure of the SKU code in this case starts from the product indications, therefore: type of shoe, model, color and size. Each variation of the item will have its own unique SKU code, which will indicate a position in the warehouse different from that occupied by another similar item, due to a different size or color.

This example serves to make people understand not only how the structuring of a SKU code takes place, but how important it is to plan the realization effectively, as a superficial construction could have a negative impact on the deposit and in principle on all operational processes. of the company.

For some companies, the SKU code has now become irreplaceable, the key element that regulates modern logistics and lightens the workload of each commercial sector. 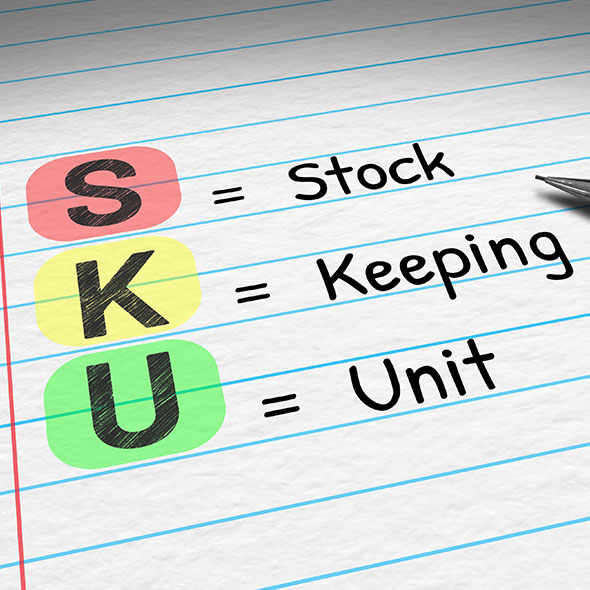 How to build an effective SKU code?

Creating confusion with a poorly structured SKU is not that difficult, especially when it comes to cataloging items in a very large warehouse. For this reason it is good to keep in mind some tips that will prevent you from making mistakes in creating your code. To describe the goods effectively it would be advisable:

For convenience, many companies prefer to delegate the creation of the SKU code to specific programs, such as ERP for example. As regards the management of the operation, it is instead necessary to use a WMS software that connects directly to the ERP.

SKU, EAN, AND GTIN: what are the differences?

Each product has different codes and although they may seem similar, each of them performs a specific function, this is the case of the codes: SKU, EAN and GTIN .

The GTIN code is the Global Trade Item Number, and is a type of classification that is used to identify the product, its origin and to put the items on the market on large distribution channels, including online ones, such as Amazon, Ebay, Alibaba, etc.

All items on the market have a GTIN barcode, and depending on the country in which the item will be sold, they may have different lengths. The large family of GTINs is divided into: EAN which means European Article Number and is used in the European market; UPC which stands for Universal Product Code and is the identification code used in North America; JAN which is the Japanese GTIN code; ISBN used to classify books; ITF-14 which is used for multipacks.

Many think that SKU code and GTIN code are the same, but they actually differ in many respects. The GTIN code, and in this case the EAN, which is used in Europe, unlike the SKU: it is not alphanumeric, but is based only on a series of numbers; usually has 13 digits and a barcode; it is made according to precise international standards and managed by the world organization GS1; it does not so much describe the product, but serves to identify the factory, the company and the certain origin of the article; it is not used inside the warehouse, but is used to place the goods on the market; it is a type of universal classification that always remains the same and does not change in the various steps within the distribution chain. The family of EAN codes is in turn divided into EAN13, EAN8 and in some cases, as for printed paper, also in EAN2 or EAN5.

So to identify a clear difference, it must be said that the SKU is used to manage the items within the company and describes the product, while the GTIN of which the EAN is part, provides information on the manufacturer and the origin. .

Why is the SKU useful in the company?

Using the SKU code has undeniable advantages, especially for the logistics department, but for the sake of consideration it is right to analyze one by one, all the benefits that derive from the application of the SKU code in the various operational phases.

Although the SKU code is mainly used to organize stocks in the warehouse, it proves to be a useful weapon to take advantage of the complex architecture of online commerce and allows you to fully exploit all the potential of ecommerce.

How not to run into SKU Proliferation?

The logistic departments of modern companies operate on the basis of increasingly complex mechanisms, and if we add to this the need that some companies have to reduce staff, it immediately becomes clearer how close the breaking point is. As if this were not enough, some company departments are subjected to considerable pressures, which in many cases are intensified by the request to make deliveries quickly.

All these factors lead to a situation that more and more companies are dealing with, namely the sometimes disproportionate increase in items in the warehouse. This is an insidious problem, which at first does not seem so serious, but which in a while turns into a real SKU Proliferation. With this term we mean the uncontrolled increase of goods in the warehouse, and which not only involves a challenge for the logistics department, but which ends up having a negative impact on all management subject to significant slowdowns.

An uncontrolled proliferation of products leads to high administration costs and at worst, a saturation of the warehouse. However, there are some techniques that allow you to avoid running into SKU Proliferation, such as the triangulation of rotation indices, ABC analyzes and the application of the Pareto principle. The use of these systems makes it possible to reduce and eliminate obsolete items from the warehouse, and to optimize the organization of spaces based on the periodic rotation of the items that come out on the market more frequently.

Normally 80% of sales are concentrated on a product niche equal to 20% of the offer. Based on this fundamental it is important to use the SKU code to quickly and systematically identify the products of greatest interest to the market, and get rid of everything that does not receive much response as quickly.

The SKU code as we have seen is very useful for ecommerce, but where to insert this data in the product sheet in order to associate it with the items in our online catalog? Simply by exploiting the " Reference " field which is the most suitable for the purpose and allows you to associate our SKU also to all combinations of our products.

Convert the SKU to a barcode

There are many solutions to convert our SKUs into real barcodes or QR Codes, readable by scanners. Many solutions are free and online, convenient if we need to create a few codes and therefore do not want to install software on our PC. A good online service to generate our barcode is certainly http://www.barcode-generator.org/ or https://barcode.tec-it.com/it

The SKU code, if well structured and exploited in all its potential, can be the strong shoulder on which every company in the organization and growth phase can rely. The most important element is personalization, as it would be useless to generate or search for standard SKUs. The more the SKU code is created on the specific needs of the company, the more effective it can be.

In conclusion, analysis, research, market surveys and needs assessment are the factors on which the structuring of each SKU code must rest. By exploiting this alphanumeric sequence on the basis of the results obtained from the aforementioned controls, it is possible to obtain a more precise inventory management, implement the activity and keep up with the continuous changes in market needs.

Find out how to get the code to GS1

For Ind Loris Modena , owner of Arte e Informatica , he began working in the IT sector in 1989 as a system engineer in charge of the maintenance and installation of IT systems. He started programming for the web in 1997 dealing with CGI programming in PERL and then moving on to programming in PHP and JavaScript. In this period he approaches the Open source world and the management of Linux servers.