How often do we hear about the importance of sporting and recreational activities? One of the most interesting is certainly the airsoft: a discipline increasingly practiced by teenagers and adults, attracting more and more those who love to have fun and practice sports at the same time. But what exactly is airsoft? The word, translated into Italian, means "compressed air", and indicates a discipline with which sports competitions are carried out using, in fact, compressed air weapons. The airsoft activity is also known in Italy with the name of "sporting tactical shooting", and consists in the use of military tactical weapons to achieve certain objectives, based on the type of game. As will be seen later in fact, each player engaged in airsoft plays a specific role: on the one hand he must respect the instructions of the team leader to win, on the other hand he must abide by certain rules, which allow him to achieve victory in a regular and as the spirit of the game requires, just as it would be in a real armed unit. But why is there so much talk about this discipline?

A recreational activity on several fronts: airsoft as a beneficial and sporting discipline

Airsoft is not just a sport, but a recreational practice that is beneficial to health and capable of reinforcing the spirit of collaboration in the participants. As this is a sport that takes place outdoors, in fact, the airsoft is good for the psycho-physical health of the players, stimulates creativity and allows you to keep fit, requiring a good dose of movement.

In concrete terms, the airsoft is nothing more than a sports competition that simulates an armed conflict, carried out within a controlled space and managed in total safety, through the use, as mentioned above, of compressed air weapons. Although it is an activity without risk of safety for the participants, the airsoft can be practiced only in compliance with certain provisions imposed by law, rules that allow you to carry out this sporting activity in a legal way. In fact, in Italy there is very strict legislation on the subject: to carry out this sport / recreational activity, characterized by the simulation of a fire fight, it is necessary to organize the competition in safe places, preferring woods or well-defined urban areas, in order to avoid damage. to people or things. Normally the airsoft reproduces a conflict between two or more opposing factions, which fight each other using military strategies and tactics. But what are the rules of the game? And how are sports competitions held? To practice the activity players can use different methods: they can use weapons with a spring, gas or compressed air mechanism. Different game modes can be used in competitions, although the most common are "Deathmatch" and "Mission" mode. In the first, two alternatives can be followed, according to the preferences of the participants: all the players shoot against all the others or, vice versa, only against the participants of the opposite team. In this game mode, the hit participant immediately exits the game, even if hit only once. Alternatively, you can follow the "Mission" mode, in which the participants must precisely carry out a mission, for example ambushing the group of the opposite team.

Rules and discipline of tactical sport shooting: what does the law say about it?

It has been seen that the airsoft is accomplished through the simulation of an armed conflict. To hit the opponent, the players can shoot plastic pellets, the important thing that the kinetic energy of each projectile launched is not more than "1 joule" of power, measured from a distance of one meter from the end of the barrel. from which the bullet starts, as expressly required by current legislation. Furthermore, in order to facilitate the identification of the object, the law requires the use of airsoft weapons made with a partially occlusive red cap. The use of these competition tools does not require the carrying of firearms and / or the obligation to report detention to the competent authorities, which are necessary conditions for the possession and use of compressed air weapons with a power greater than 7.5 joules. In any case, these are instruments that cannot be freely carried anywhere, but can only be transported in a special suitcase or box, for the sole purpose of going to the area set up for the practice of airsoft. The purchase of airsoft weapons is allowed only to adults with a valid identification document (except in the case in which the airsoft weapon is equipped with a power lower than 1 joule, in the latter case it can be purchased even by those who have reached the age of 16). The use of these weapons in an airsoft field is also allowed to minors, even if the possibility of entering the organized field or not also depends on the specific organization team, which could decide to exclude players under the age of 18. . Another important rule is that concerning the clothing of the players: they cannot use uniforms similar to those of the police forces, in order to avoid confusion in the public.

Airsoft is not a simple sporting activity, but a much loved and widespread recreational practice, above all because it teaches the value of union, company and collaboration. Thanks to the airsoft you learn the ability to reach a common goal, testing yourself and your ability to work in a team. It is not an activity reserved for the most skilled, anyone can practice airsoft while having fun and keeping fit, without ever taking themselves seriously and remembering that it is still a game. 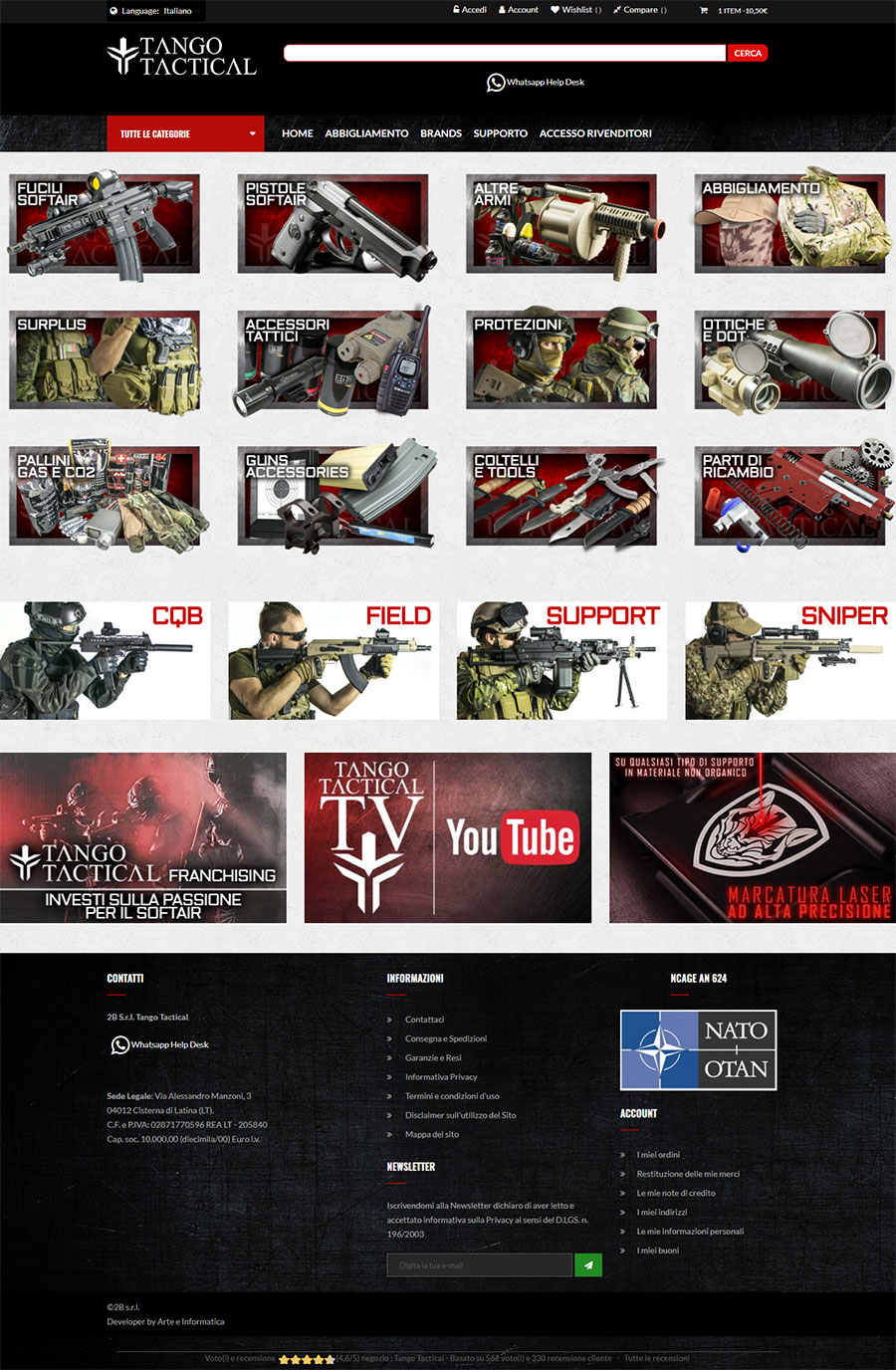 Tango Softair is the online reference point for this sport. On Tango Softair you will find everything you need to compete at the highest level.

Tecnoacquisti.com® is among the first Prestashop Platinum-certified agencies in Italy and in Europe. We specialize in helping small and medium-sized businesses sell online.

You can rely on our digital agency for advice or resolution of issues related to your online store or company website.